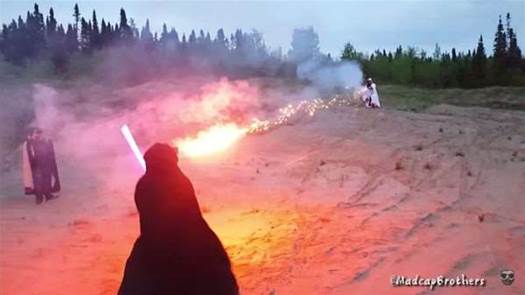 Alright, everyone, prepare for the battle of the ages.

In the left corner, wearing a brown robe and carrying a blue lightsaber (probably made of plastic but you get the idea) is the Jedi Knight of Star Wars lore.

In the right corner, wearing a white robe and possessing the legendary fireball-throwing powers of a standard roman candle, is the wizard.

In all seriousness, and as a disclaimer, we couldn’t think of a more stupid, dangerous, and entertaining video to make than a guy dressed as a wizard firing roman candle bursts at a guy with a toy lightsaber. So instead we just kept watching this one. You should too.

Just don’t try it at home… because fire.