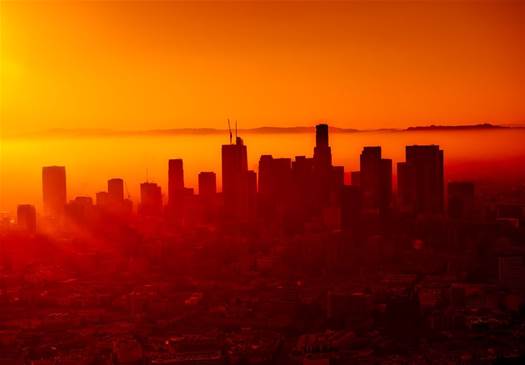 Labor Day weekend delivered record-breaking temperatures to California as a heat wave swept the state, fanning the flames of the largest wildfire Los Angeles has seen in decades. The unusually warm weather bears the mark of climate change, which is fueling record heat around the globe.

While politicians elsewhere waffle on climate change, officials in Los Angeles are tackling the problem head on with a radical plan to lower the temperature of the city. Mayor Eric Garcetti intends to cut the average temperature in LA by 3 degrees F over the next two decades. As part of that effort, LA streets are getting a new coat of paint.

Cities are prone to overheating, thanks to something called the urban heat island effect. Cities tend to be short on trees, which provide shade, and they are covered with black pavement, which absorbs heat from the sun. Think of how it feels to wear a dark shirt versus a white shirt on a sunny day. A black shirt absorbs light, heating you up. But a white shirt reflects light, keeping you cool.

The average temperature in a city of a million or more people can be more than 5 degrees F hotter than surrounding areas. That extra 5 degrees can turn a hot day from uncomfortable to deadly. As temperatures rise, cities will be an especially dangerous place to be during a heat wave, as sweltering weather threatens heat exhaustion, among other maladies. To protect public health, city officials are going to make the city cooler.

As part of that effort, Los Angeles is coating its roads in CoolSeal, a gray paint that keeps streets and parking lots 10 degrees cooler than black asphalt. Engineers developed the material for military air bases to keep spy planes cool while they rest on the tarmac. This can help them avoid being detected by satellite-mounted infrared cameras, which measure heat.

CoolSeal will help Angelinos save money during the summer, when air conditioning sends power bills soaring. And it will save lives by lowering temperatures and improving air quality. Hot weather worsens air pollution by turning car exhaust into smog, which can make life miserable for people with asthma and other respiratory conditions.

Of course, LA will have to do more than paint over a few streets to cool off the city. Angelinos will also need to plant more trees and apply white paint to rooftops — at least those not already covered in solar panels. While LA is a pioneer of reflective streets, other cities, like New York, are already experimenting with reflective roofs or, like Melbourne, lowering the temperature by planting trees. LA is hardly alone in its effort to stay cool.

“This is an urgent challenge, and it’s much bigger than one person,” said Mayor Garcetti in a recent statement. “Climate change is a fact of life that people in Los Angeles and cities around the world live with every day.”

The world’s water quality might be in trouble
Can we blame climate change for February’s record-breaking heat?