This mysterious ancient tablet could teach us a thing or two about math
Rachel Feltman
at 10:33 AM Aug 28 2017 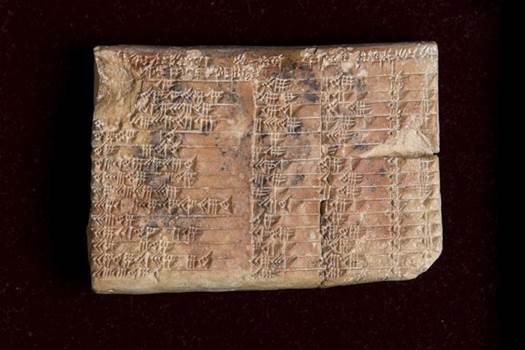 Some researchers say the Babylonians invented trigonometry—and did it better. A long-debated tablet known as Plimpton 332, featuring 3,700-year-old scrawls from a Mesopotamian scribe, is the subject of a new study in the journal Historia Mathematica this week. A team of modern mathematicians claim that new analysis reveals the relic as the oldest ever example of trigonometry, the math that explains relationships between the elements (sides and angles) of triangles. Their findings might make Hipparchus turn a perfect 90 degrees in his grave: The Greek genius often credited as the father of trig didn’t come up with it until 1,000 years later.

The results of the new study are far from conclusive. But they are plenty fascinating.

"A treasure-trove of Babylonian tablets exists, but only a fraction of them have been studied yet," Norman Wildberger, an associate professor at the University of New South Wales and co-author of the study, said in a statement. "The mathematical world is only waking up to the fact that this ancient but very sophisticated mathematical culture has much to teach us."

There's no question that Plimpton 332 was used for some sort of math. Discovered in Iraq the early 1900s, the clay slab features four columns and 15 rows of numbers. Scientists long-ago surmised that the cuneiform values came in what are known as Pythagorean triples. The Pythagorean theorem (a 2+b 2=c2) describes the relationship between the lengths of the three sides of a right triangle. A Pythagorean triple is any sequence that fits into the equation; in other words, any three numbers that could correspond to the lengths of a triangle with a 90-degree angle. On the tablet, the sequences correspond to flatter and flatter right triangles as you go down row by row.

The tablet, while well preserved, is incomplete. Without knowing the total number of rows and columns it once housed—or what was on the missing lot—it's difficult to make any stronger conclusions about its purpose. Some researchers believe that these numbers existed to help teachers of mathematics check their students' work. We might be looking at a very early bit of Algebra homework: Maybe a scribe just wanted to make his students solve for unknown variables, and only incidentally used Pythagorean triples.

Until now, it's the best explaination we've had.

In their new study, Wildberger and David Mansfield try to bridge this knowledge gap by cobbling together previous work on fragments-that-might-have-been. They believe they can make the case for six original columns and 38 rows. Were the tablet completed, they posit, it could have featured trigonometric ratios—information the reader could have used to calculate unknown angles—more accurate than those on our modern trig tables.

The reason for the heightened precision is quite fascinating. We have a base-10 numerical system. In base 10, there are only two exact fractions (1/2, or .5, and 1/5, or .2). Anything else you divide is going to have a trail of sticky digits attached. Think about it: You can't actually cut the price of something into perfect thirds; one third of a dollar is .333 (etc) cents. You've got to be sneaky and move a few pennies around to get to numbers round enough. On the other hand, it's easy to split an hour into thirds; it's an even 20 minutes. The Babylonians counted in base 60, which means that in addition to getting perfect fractions from multiples of two and five, they also throw three into the mix. It just makes division a smidgen more precise, because you're not rounding up and down as much.

"This precise arithmetic of the Babylonians also influenced their geometry, which they preferred to be exact," the authors wrote in a commentary for The Conversation. "They were able to generate a wide variety of right-angled triangles within exact ratios b/l and d/l, where b, l, and d are the short side, long side and diagonal of a rectangle. The ratio b/l was particularly important to the ancient Babylonians and Egyptians because they used this ratio to measure steepness."

The trigonometry you might have learned in school taught you to calculate great approximations of the lengths and angles of triangles. But if the new study is correct about the tablet's usage, the Babylonians would have been using exact values throughout. Whether or not there are any applications for this new take on an old math remains to be seen.

The study also happens to rely on an awful lot of circumstantial evidence. Many scholars are unimpressed with such a bold conclusion based on what might be on a missing piece of the puzzle. Some experts maintain that other texts make it clear the Babylonians didn't have such an advanced understanding of angles. Others allow that it's possible there was some serious trigonometry going on in Babylon, but they don't necessarily buy the research team's next big leap: the suggestion that these super-accurate tables were used to help construct such wonders as the city's hanging gardens.

For now, these findings don't carry enough evidence to be more than an interesting—and not completely far-fetched—story. To draw conclusions this big about the history of math (and Babylonian construction methods, for that matter) we're going to need a lot more tablets.