The Science Of Hamster Balls: New Rolling Robot Could Help Farmers
Francie Diep
at 03:00 AM Jun 26 2013 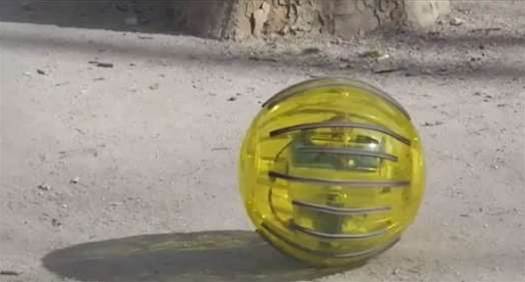 We’ve seen robots with wheels, robots with legs, and even robots with whegs. We’ve seen snakebots that use a creepy combination of undulation and grip to shimmy and swim. Now one research team has come up an innovative new robot with yet another way of getting around. They’ve made a plastic sphere with a mechanism inside to propel it like a hamster in a ball.

The robot’s creators, a team of researchers from the Universidad Politécnica de Madrid in Spain, designed it to roll around in farmer’s fields, gathering information about the soil. Its unusual shape helps it navigate different terrains. The UPM roboticists published a paper in the journal Industrial Robot describing its performance in field rows. In videos, they’ve shown it ambling along dirt and grass. It seems to work especially smoothly on sand and, of course, concrete.

Inside the robot, which is called Rosphere, there’s an axle on which hangs its interior mechanism. The mechanism swings back and forth to change the ball’s center of gravity and get it moving. In addition, drive wheels at either end of axle help Rosphere steer in smooth curved turns, the BBC reported.

Rosphere doesn’t work completely autonomously yet. Instead, it communicates wirelessly with a laptop, from which researchers can control it. More research is needed to make it navigate by itself in slippery soil, the UPM researchers wrote in their paper.

This isn’t the first time researchers have realized that spheres might be good for navigating uneven ground. Just search for “robot sphere” on YouTube, or check out this “tumbleweed” rover, supported by NASA research, that could bump its way over rocks on the surface of Mars.

comments powered by Disqus
Filed under:
robots
MORE FROM POPSCI

US Army Tests War Robots In The Pacific

This Robot Can Open Your Pill Bottles For You

Dogs Are Perfectly Happy To Socialize With Robots