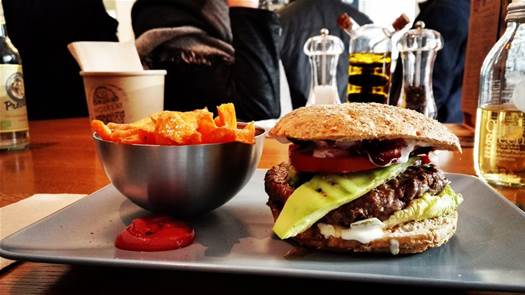 “and a side of insulin, please”
Pixabay
Medicine //

Lots of people rely on insulin injections to manage their blood sugar. But after nearly a century of helping diabetics, the hormone is starting to look appealing for other uses as well.

According to a new study published Tuesday in Nature Communications, even individuals without diabetes might one day use insulin around mealtimes—but as an appetite-suppressing nasal spray.

It’s still early days, but in this study, “we show that insulin is not only involved in metabolic eating, it is also important for regulating hedonic eating,” explains author Stefanie Brassen, a neuroscientist at the University Medical Center Hamburg-Eppendorf. In other words, it doesn’t just help regulate your body’s endless need for energy. It might also have some sway in the drive most of us have to eat for pleasure.

The team studied 48 volunteers: 28 with normal insulin sensitivity, and 20 whose cells fail to respond to insulin effectively, a condition known as insulin resistance. The scientists had each participant rate a series of food and non-food items while in an fMRI machine. They ran the test twice, roughly a week apart. Each time, the volunteers fasted for 10 hours overnight to prime themselves for the sight of scrumptious food. Then they inhaled eight puffs of either insulin or a placebo per nostril. Once the insulin reached their brains—about half an hour later—the volunteers rated various foods and non-foods on a four-point scale of likability. Brain scans simultaneously captured the actual brain activity by watching blood flow.

The neuroscientists found that individuals with normal insulin sensitivity liked pictures of food five percent less after inhaling insulin compared to the placebo. In fact, for some individuals, interest dropped by as much 27 percent. The brain scans showed similar results.

Brassen believes that this is the first time anyone has studied the direct effect of insulin on human behavior and the reward pathways in our brains. Normally, the sight of delicious food triggers these reward pathways to release the neurotransmitter dopamine. The dopamine then motivates us to seek out food.

But the neuroscientists posited that they could make that reaction weaker. With extra insulin in the brain, cells stop shouting to one another about how tasty everything looks—it’s like they develop a hearing problem. Or a communication problem, anyway. As the insulin receptors dotted along the brain’s reward pathway get filled up with insulin molecules, dopamine has a harder time getting cells to pick it up and pass it along. The shout becomes a whisper.

However, the insulin nasal spray didn’t have this dampening effect on the brains of participants with insulin resistance—an insensitivity to the hormone which results in high blood sugar. This condition can stem from frequent overeating, but we’re also more likely to develop it as we age. For these individuals, the experiment results were less clear cut. In a few instances, some people even appeared to favor food more after the treatment.

It’s not entirely clear why that was the case, says Brassen. Perhaps the fact that insulin is generally less effective in these participants’ cells makes it more difficult for the hormone to actually influence dopamine release. But in most individuals, Brassen points out, “insulin resistance is reversible.” So the team is already investigating whether three months of calorie restriction might normalize subjects’ insulin function—and help make the spray effective.

Indeed, “it would be tremendous to find out how this ‘brain insulin resistance’ could be overcome,” says Manfred Hallschmid, a medical psychologist at University Tübingen’s Institute for Medical Psychology and Behavioural Neurobiology who was not involved in the new study. Hallschmid suggests trying the experiment again, but with higher doses of insulin or even insulin-sensitizing agents to overcome the individuals’ natural insensitivity to the hormone.

The researchers didn’t choose to use a nasal spray to encourage some kind of easy-access, dystopian pre-meal ritual. It’s actually just the best delivery system for this kind of experiment. In past studies, researchers directly injected the hormone into animals’ brains. However, that’s hardly a suitable method for humans.

But a normal insulin injection elsewhere in the body wouldn’t work either. For one thing, such an injection might cause an accidental crash in the volunteer’s blood sugar. For another, it’s difficult to get the hormone across the finicky blood-brain barrier. This barrier keeps unwanted substances away from our brains, and it poses a big challenge for large molecules like insulin. In fact, until the 1970s, scientists didn’t even realize we had insulin floating around our heads. But by using a nasal spray, the researchers were able to bypass all these problems and send the insulin directly to the central nervous system through the olfactory nerve.

And this isn’t actually the first time scientists have fiddled around with insulin sprays. An ongoing clinical study is looking at whether such sprays could help Alzheimer’s patients. As it turns out, the brain also has insulin receptors scattered throughout regions dedicated to memory, cognition, and more. So perhaps one day we’ll have insulin sprays that curb our unhealthy cravings to help us stay healthy—and keep us safe from memory loss as we age.