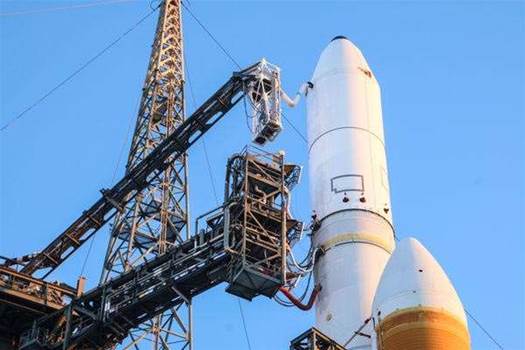 There are secrets space can’t keep. When the National Reconnaissance Office launched an object into space earlier this month, we knew only rough details: the size of the rocket used (large), the nature of the agency launching it (reconnaissance), and the levels of secrecy around the payload (many). Now, thanks to the work of amateur astronomers, we have information that’s impossible to conceal: where, exactly, the object is in orbit–plus, what it might be.

Because of the super-heavy rocket used to lift it into space, it’s believed the satellite is a large Mentor or Advanced Orion satellite. At a satellite tracking blog, amateur skygazer Marco Lanbroek explained further:

Mentor (Advanced Orion) satellites are SIGINT satellites: satellites that “listen” for radio signals. They are “the largest satellite[s] in the World”, according to a statement by the then NRO director Bruce Carlson in 2010 at the time of the Mentor 5 (NROL-32) launch. There has been some speculation (it seems to be not more than that) that these satellites might have a huge fold-out mesh antenna some 100 meters wide.

Our observations suggest that these satellites indeed appear to be extraordinarily large. They are very bright (brighter than other geosynchronous payloads), typically of magnitude +8. They are the easiest geosynchronous satellites to photograph: a standard 50mm lens with a 10-second exposure will do.

Langbroek tracked down what he thinks is the NROL-37 payload that just launched, Motherboard reports:

…Marco Langbroek details how he and two other amateur skygazers found the Mentor-7 satellite near 104 E longitude over the course of a few days using standard photographic equipment. (You can always spot a geosynchronous satellite by taking long exposures of the sky at night and noting which “stars” aren’t moving.)

In their observations, the satellite tracking crew found that the spacecraft seems to be drifting west to its fixed geosynchronous position. Lanbroek speculates it will eventually stop near somewhere over Central Africa or Sri Lanka.

When it launched the satellite, the National Reconnaissance Office showed off the mission patch, featuring an armed knight with a dragon-clawed sword, as a symbol of “tenacious, fierce focus with the claws representing extreme reach with global coverage.” If it settles as expected into place watching the Indian Ocean, or perhaps the Horn of Africa, it will join a constellation of American surveillance satellites, watching yet another slice of the globe.