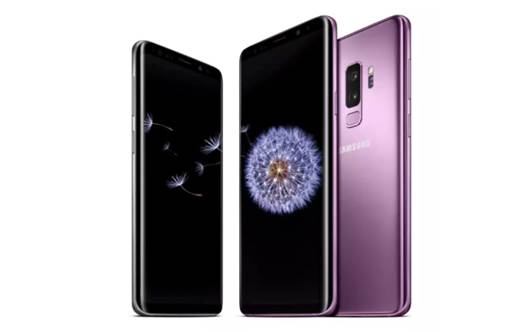 The Galaxy S9 with its fancy new camera was the biggest announcement of the MWC 2018 show.
Samsung
Mobile //

Couldn’t make it to Barcelona? No worries. Here’s what you need to see.

Mobile World Congress is an annual opportunity for electronics manufacturers to get together somewhere that isn’t CES and show off new stuff. It reveals some interesting products in the mobile electronics space, and exposes some trends we can expect to continue throughout the year. In case you didn’t keep up with all the coverage this year, here’s a recap of the new stuff.

The biggest release of MWC 2018 is Samsung’s new Galaxy S9. It’s not wildly different from the S8 that came before it, but it has an improved camera with a wider aperture for better low-light shooting, as well as improved digital assistant performance from its proprietary Bixby platform. If you want all the details, check out our announcement post.

See that little thing sticking out of the keyboard? That’s a webcam.

At first glance, it’s obvious that Huawei’s MateBook X Pro computer borrows design—and name—elements from Apple. But, there’s a secret webcam hiding under the F6 key on the keyboard. It pops up when you want to use it and retracts when you’re done. Sure, it’s gimmicky, but I currently have a piece of gaffer’s tape over my MacBook Pro camera so maybe there’s something to it after all.

Nokia announced a phone that’s bent like a banana

Now all you need is a long trench coat and some futuristic sunglasses and you can pretend you’re in The Matrix.

The Nokia 8110 probably isn’t a phone that you’re going to buy, but it generated a ton of attention at the show. This slider-style phone is curved—yes, like a banana—and garnered fame as the phone they used in The Matrix. The new version uses 4G instead of old 3G networks and will only cost around $100. And yes, it comes pre-loaded with the Snake game.

Sony’s new smartphone has a fancy camera and a strong spec list.

The Sony ZX2 isn’t a giant leap from its predecessor, but it is a new flagship for the brand. It has some impressive stats, including an 18-megapixel camera, which is considerably higher than most other flagships, including the iPhone X. Sony has made good phones in the past, but the problem seems to be convincing people to buy them.

A bunch of phones had stupid notches in their screens

The Leagoo S9 is only $150, so it’s not meant to compete with the iPhone X, but it sure is meant to look like it.

First, the Essential phone cut a notch into its screen to fit its front-facing camera. Then, the iPhone X did the same thing to make room for its Face ID unlocking system. Now, lots of other smartphone companies are doing the same thing because…um….hey, Apple did it!

This is all part of an effort to cut down on the amount of bezel that phones have around the screen itself. Personally, I hate this trend, but only time will tell if it endures or we can go back to a sane world where a little bit of bezel is OK if we don’t cut into the screen.

There were even fewer headphone jacks

Samsung is very proud of the fact that its Galaxy S9 phone still has a tiny jack to plug in regular wired headphones. If that’s an important feature for you, MWC was probably a very depressing place, with some of the other key phones like the Sony XZ2 and the Nokia 8 Sirocco lacking in the old-school audio-jack department.

Here’s the bottom of the Leagoo phone, which seems insistent upon following every bad phone trend in 2018.

I have asked several smartphone designers now why we’re moving to screens with rounded corners on smartphones and the answer has been that it’s a “design choice” every single time. Again, this is part of the movement to totally eradicate bezels, but it gives me flashbacks to my Palm Pre from the early 2000s.

Vivo Apex just made the whole phone a screen

One of the most hyped phones at the show was the Vivo Apex, which took the all-screen phone to the next level. It doesn’t have a notch or a home button because there’s a fingerprint sensor underneath the OLED screen itself. There isn’t even a speaker. Instead, the whole phone vibrates to conduct sound during a call or media playback. The front-facing camera actually pops up out of the top of the phone when you want to use the phone to keep the face clean. It’s an interesting concept, but we’ll see how much traction it can get in a field crowded with big names.