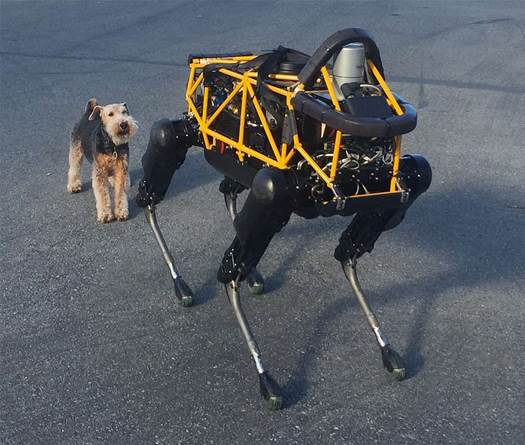 Dystopian wobbly robots are not what Google was searching for. As reported today by Bloomberg, Google is selling Boston Dynamics, makers of such indelible robots as dog-mimicking BigSpot; the too-loud-for-the-Marines robot mule LS3; and Atlas, the DARPA-sparked humanoid rescue robot we all saw get beaten up last month.

Google first bought Boston Dynamics in 2013, and Bloomberg reports that the plan to sell it comes after culture clashes within the larger Google enterprise and the lack of a deliverable product.

That first product was supposed to be the LS3, or Legged Squad Support System. Walking like a headless horse, the machine could carry 400 pounds of gear wherever Marines went. It just couldn't do it quietly, and after trials at war games in Hawaii, the Marines decided not to buy the robot. The Marines also tested Spot, a smaller Boston Dynamics robot dog, but there are other, cheaper options for robots that peek into a room before Marines get there.

ATLAS, the humanoid rescue robot, demonstrated remarkable progress last month, recovering from falls and picking up packages after dropping them. While the recoveries demonstrated a remarkable technological achievement, the appearance of workers knocking over humanoid robots, combined with the frequent reaction by the public that “this is how Skynet happens” (a dystopic reference to The Terminator franchise), became an optics problem for Google.

It's not yet known who will buy Boston Dynamics, though early word has both Toyota and Amazon are said to be interested in the company (and both have advanced robotics programs of their own).

In the meantime, we might see more BigDogs hanging out with other dogs in parking lots, hoping for some corporate salvation — a rhetorical bone, if you will.

Who Should Buy Boston Dynamics From Google?