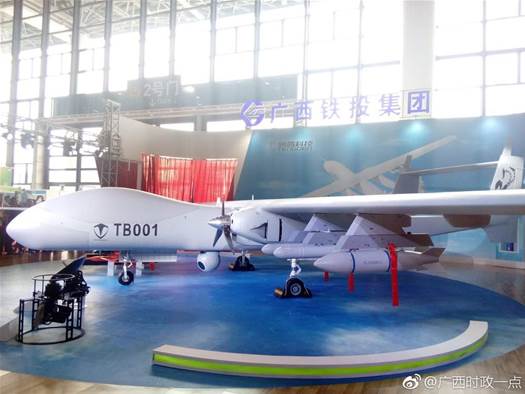 China’s drone newcomer Tengoen Technology (also spelled Tengdun) has ambitious plans. The company promises to market armed drones for purchase. It also promises to build the world’s biggest cargo drone. That’s quite a slate for a company that was only founded in 2016.

The TB-001 Scorpion, Tengoen’s flagship vehicle, is a twin-engine, double-tail drone. It has a maximum takeoff weight of 2.8 tons, a range of more than 3,700 miles, and provisions to carry two 220-pound bombs or missiles. Tengoen has also partnered with Chinese delivery company SF Express to build a souped-up TB-001 for cargo delivery, increasing the drone’s size to 3.3 tons, with a 1.2-ton payload. In December 2017, the modified TB-011 showed off its capability by para-dropping supplies to a Huawei repair crew fixing a cell tower in the mountainous Yunnan Province.

Tengoen is already building the first of these 137-foot-wide, 4,660-mile-range cargo drones.

In the cargo and delivery space, Tengoen is already at work building an eight-engine drone with a wingspan of more than 137 feet to carry a payload of 20 tons payload up to 4,660 miles. That’s akin to a medium-sized manned cargo plane.

The carbon-fiber, double-bodied drone carries the payload module between the two fuselages (looking a bit like a robotic baby brother to the Scaled Composites Stratolaunch). It is being built at Tengoen’s facility in Chengdu, and its supposedly taking flight in 2020.

A Drone for All Seasons

The behemoth can be customized for missions like search and rescue, aerial refueling, and intelligence gathering.

Tengoen executives were quick to highlight civilian applications for the unmanned aircraft system: space launch, fire fighting, and emergency relief. The drone’s large size and modular payload capacity could also take on a variety of military missions, including intelligence gathering and electronic warfare. Its large payload could make it function as an aerial tanker, too, refueling aircraft like search-and-rescue helicopters, patrolling fighters, cargo transports, and bombers.

While the Ehang 184 is quite pricey, Ehang hopes that a mass-production run of its successors would achieve economies of scale, bringing down the price.

Tengoen is just one character in a larger story about China’s booming unmanned aerospace sector. In fact, it’s one of 110 UAV manufacturers in Chengdu alone. Other private Chinese manufacturers like Ehang and DJI have products with dual-use applications, too. As China’s multibillion-dollar drone industry grows in size and sophistication, China’s private sector aims for a bigger share of both the People’s Liberation Army’s purchases, not to mention a slice of the wider global market.