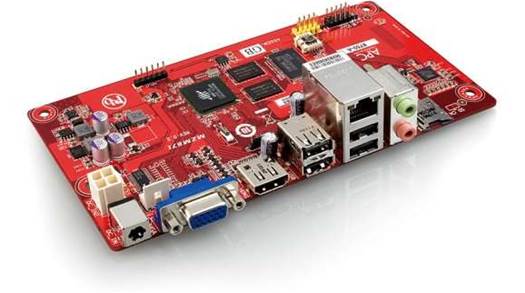 Well, given that Raspberry Pisare selling like hot cakes (or maybe pies), its only to be expected that other all-in-one mini computing platforms would try and push themselves out onto market. This particular platform runs on Android, is about the size of a smartphone, and costs US$49 a pop.

Some of the particular advantages of this device, known as the Android PC or APC,  is that it comes with VGA and HDMI outputs, supports OpenGL, and can handle H.264 video codecs and playback at 720p. It also, in the words of the manufacturers, “drop[s] power consumption to the point of making an energy-saving light-bulb jealous.”

So while it would no doubt be useful merely as a development aid for Android apps, you should also be able to turn it into a Neo-ITX media centre, with most of the fiddly DIY PC building taken out of the equation. It doesn’t come with a case, but given it will fit into both the Mini-ITX and micro ATX form factors, picking a case up for yourself shouldn’t be a problem.

The whole thing runs on an ARM processor, packs half a gig of DDR3 RAM, 2GB of flash storage, and the obligatory USB, microSD and Ethernet ports.

It runs a customised version of Gingerbread  (that’s version 2.3 of Android for those playing along at home), but no doubt early adopters will get ICS to stick on these as well.

Pre-orders are just over the horizon, with the first devices expected to drop in July.

HTC Unveils One A9, The Best-Looking Android Phone Yet
More Powerful Raspberry Pi 2 Will Run Windows 10