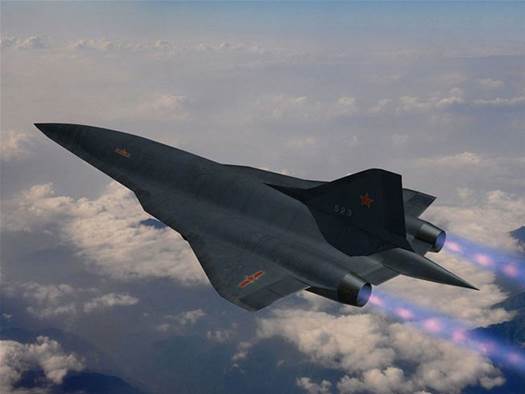 American and Chinese defense giants are moving quickly to reach the edge of space, aiming to launch hypersonic aircraft that can cross continents in under an hour. What exactly does hypersonic mean? Speeds of over Mach 5, or more than 3,835 miles per hour.

It’s an arms race well worth watching. Developments have the potential to revolutionize access to space and transform transcontinental travel for civilians. It could also transform national security, making existing air and missile defenses obsolete.

China is home to two companies reaching for the hypersonic prize, the Chinese Aerospace Science and Technology Corporation (CASC) and the Chinese Aerospace Science and Industry Corporation (CASIC). Meanwhile, in America, Lockheed Martin is making waves, having told aviation journalists that its hypersonic technology is about ready for flight testing.

Lockheed Martin’s progress almost certainly refers to the turbine rocket combined cycle (TRCC), an engine that switches between turbofan, ramjet and scramjets for subsonic, supersonic, and hypersonic flight. The TRCC engine will be tested on a fighter-sized flight testbed by 2020. If all goes well, it’ll shortly thereafter power the SR-72, a Mach 6, unmanned twin-engine reconnaissance aircraft that is targeted to start flight by 2030. That aircraft is designed to enter highly contested and defended airspace at altitudes of 18 and 62 miles, using its speed to outrun enemy defenses, like the SR-71 Blackbird before it. Executive Vice President and General Manager at Lockheed Martin Rob Weiss also suggested that hypersonic planes could fire hypersonic missiles. That suggests that the SR-72 could join the B-21 stealth bomber in the USAF’s future global strike arsenal.

The “Phantom Express” XS-1 is a DSTO space-launch vehicle, consisting of a rocket-powered launch plane and a second-stage rocket that will separate from the plane to launch 1.5 tons into low-earth orbit.

Another key U.S. project is the “Phantom Express” XS-1 spaceplane, which is being developed by Boeing and funded by DARPA. It’s a dual-stage-to-orbit (DSTO) vehicle. Stage one: a hypersonic plane powered by liquid fueled rockets. Once the XS-1 is in near space (18- to 62-mile altitude), we reach stage two, when an expendable rocket attached to the plane’s back will detach and fly into orbit to deploy its 1.5-ton payload. The carrier rocket plane then will be able to return to a runway, where it will be prepped for another launch within 24 hours. The plan is that it can undertake at least 10 launches in 10 days, providing the U.S. space system more resilience to replace satellites in the event of a conflict.

China, however, is developing some major competition in this same hypersonic race. There are two separate projects. For one, CASIC debuted the Teng Yun spacecraft design during the Global Space Exploration 2017 (GLEX 2017) conference in Beijing. The DSTO Teng Yun would have a combined weight of 100-150 tons. The first stage is a Mach 6 hypersonic ‘carrier’ aircraft, with TRCC engines that can fly to altitudes of 18 to 25 miles. Unlike the XS-1, the Teng Yun’s second stage is a reusable, 10-15-ton rocket-powered spaceplane capable of carrying either 2 tons of cargo or 5 passengers.

CASIC Vice President Liu Shiquan said that company has finished technology demonstration of key Teng Yun flight technology (like, you know the engine), and looks to have the two-stage space plane flying by 2030, as part of a $16 billion research effort.

The Teng Yun’s second stage can either be a launch rocket, or take five taikonauts to a future Chinese space station.

Much like the U.S. systems, the CASIC hypersonic carrier could have other applications besides space launch. It’s big enough to carry significant payloads (10-15 tons), which could include sensors and weapons. With modifications, like additional fuel tanks for increased range, its hypersonic speed and near-space flight altitude could fit with Chinese military needs for fast, global reconnaissance and strike. As CASIC manufactures most of China’s missiles, its experience with rocket motors, ramjet engines (and future scramjet engines) means that it likely has the resources to build the complex TRCC engines for the hypersonic carrier, and by extension a hypersonic recon and strike plane.

The Chinese hypersonic spaceplane, with a combined cycle engine that hops between jet, scramjets, and rockets, promises to be the ultimate form in reusable and easy space travel. In theory, it could cross the Pacific Ocean in one hour. China hopes to have these fast birds in the sky (with people onboard!) by 2030.

The turbo-aided rocket-augmented ram/scramjet engine (TRRE), which uses rocket augmentation in order to aid in the transition into the supersonic and hypersonic flight regimes, could be the world’s first combined cycle engine to fly in 2025, paving the way for hypersonic near space planes and single-stage space launchers.

CASC’s ambitions match the projected timeline for the rocket-assisted scramjet being built by the Beijing Power Machinery Research Institute for near space strike and reconnaissance, as well as dual- and single-stage-to-orbit (SSTO) vehicles. BPMRI will commence full-scale testing of the technology demonstrator in 2020, followed by the flight of a full scale afterward. Further improvements will lead to a scramjet engine powerful enough for an SSTO hypersonic plane to fly directly to orbit in one piece, as opposed to the DSTO model, where only part of the spacecraft makes it to orbit. Compared to the smaller and cheaper DSTO, a sufficiently fueled SSTO spaceplane could depart from and reenter orbit on multiple occasions during the same flight, traveling at greater speed compared to a near-space-only hypersonic aircraft.

CASC also has more conservative plans for its own DSTO program. Its GLEX 2017 presentation showed a three-phase DSTO approach. The first phase involves a reuseable hypersonic rocket plane with an expendable upper stage rocket. In September 2016, CASC had also announced plans for a vertical-takeoff, rocket-powered spaceplane known as the Scaled Suborbital Vehicle. This Mach 8, 20-passenger, 100-ton rocket plane can reach an altitude of 81 miles and carry a second-stage rocket with a 2-ton payload. It is likely that Phase 1 of the CASC DSTO is the Scaled Suborbital Vehicle.

Among the pitch CALT made to the International Aerospace Congress: a very low launch cost for small payloads, at under $4,000 per kilogram.

The second phase, similar to the Teng Yun, makes rocket-powered aircraft reusable. The upper stage, shaped like the Shenlong robotic spacecraft, returns by landing on a runway.

The third final phase of the CASC DSTO proposal shows that the first stage, like Teng Yun, will be powered by TRCC engines. Like the Teng Yun, the hypersonic carrier developed in third phase will likely be capable of extended near-space hypersonic operations.