A strange object from outside our solar system just zoomed past the sun
Mary Beth Griggs
at 10:44 AM Oct 30 2017 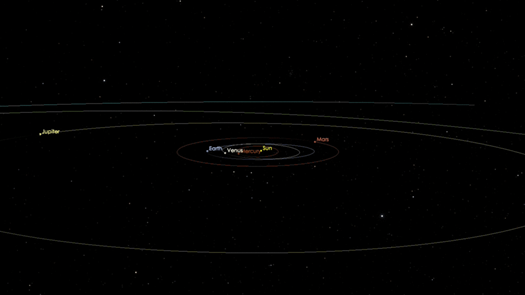 Travelling between the stars has been a dream of humanity for generations. But while our species might not be able to make that trek for a long while, there are some seasoned travelers whizzing around the galaxy, and one of them stopped by our solar system this week.

Astronomer Rob Weryk, a postdoctoral researcher at the University of Hawaii Institute for Astronomy was working with data collected from the university’s Pan-STARRS 1 telescope on October 19 when he first noticed the strange moving object, and reported it to the Minor Planet Center, which compiles reports of minor planets, moons, natural satellites, and comets from all over the world.

The Pan-STARRS 1 telescope helps NASA identify and track near-Earth objects, like asteroids, which head into Earth’s neighborhood. Until now, all of those objects have originated from our own solar system. But this discovery was different. Instead of staying roughly in the same plane as most of the other planets, this object jetted in almost perpendicular to…basically everything else in the Solar system.

Other telescopes and astronomers around the world made similar observations and sent in reports tracking the movement of the object on its journey. It was decidedly odd, and incredibly exciting.

“This is the most extreme orbit I have ever seen,” Davide Farnocchia, a scientist at NASA’s Center for Near-Earth Object Studies (CNEOS) says in a statement. “It is going extremely fast and on such a trajectory that we can say with confidence that this object is on its way out of the solar system and not coming back.”

The object, temporarily called A/2017 U1, is less than a quarter mile long, and when it was entering the solar system it was speeding along at 15 miles per second. At first, people thought it might be a comet, but it doesn’t have a comet’s distinctive tail. Astronomers calculate that it passed closest to the Sun on September 9, passing just inside the orbit of Mercury.

The Sun’s gravity changed its course and speed, sending it hurtling out of our star system and towards the constellation Pegasus. It came closest to Earth on October 14, zipping by just 15 million miles from our planet. To put that in perspective, that’s less than half the distance between Earth and Mars.

We don’t know much about the object, and as it’s moving away from us at about 27 miles per second, astronomers won’t get many more chances to make detailed observations, though there’s a chance the Hubble Space Telescope might be able to catch a glimpse of it as it flies away.

“A/2017 U1 is already faint and fading quickly. We can still use large telescopes to track its position for a month or maybe two,” Farnocchia says in an e-mail. “The object may already be too faint for physical characterization and measuring its size, mass or composition.”

Scientists are poring over the data they do have and trying to get a few last glimpses of the object before it fades from view. The early results are tantalizing. In addition to not being a comet, it seems to have a distinctly reddish color, similar to asteroids in the Kuiper Belt.

Even as observations continue to pile up, researchers are thrilled to see evidence of something that had been often discussed and theorized about, but that some astronomers didn’t expect to see in their careers, or at least, in the next few decades.

The observations so far do line up with published theories. In a 2016 paper, astronomers including Darin Ragozzine of Brigham Young University predicted that an interstellar object might initially be considered a Near Earth Object based on how it was moving. That’s what researchers thought A/2017 U1 might be initially, before they got additional glimpses of the object.

As researchers are celebrating the discovery and gathering more information about A/2017 U1, they’re also looking forward to finding other interstellar visitors. The eccentric path of A/2017 U1 tells researchers that it was probably flung out of another, distant solar system long ago.

“Observing ISOs [interstellar objects] in our solar system means we are probing the dynamics and formation of other solar systems! If these objects are getting kicked out of their home systems and into ours, we can learn about their home systems formation histories.” Bonnie Meinke, Deputy Project Scientist of the James Webb Space Telescope says in an e-mail. “This is similar to how planetary scientists learn about Mars by studying the Martian meteorites that hit Earth.”

In the future, the next generation of large telescopes, including the Large Survey Synoptic Telescope, currently under construction in Chile could help researchers like Ragozzine learn more about where those objects are coming from, giving us a better idea about whether they’re zipping in directly from a star that cast them away, or if they’ve wandered the galaxy, roving from star to star for billions of years.

“NASA has been searching for hazardous asteroids for about twenty years now, so a simple extrapolation would say one ISO discovery every twenty years, possibly more frequently as new surveys with more powerful telescopes come online in the future,” Farnocchia says. ”But we only have one discovery so far, too few to do any statistics, and so it’s not easy to reliably predict the rate at which new interstellar objects visit the solar system and we can discover them.”